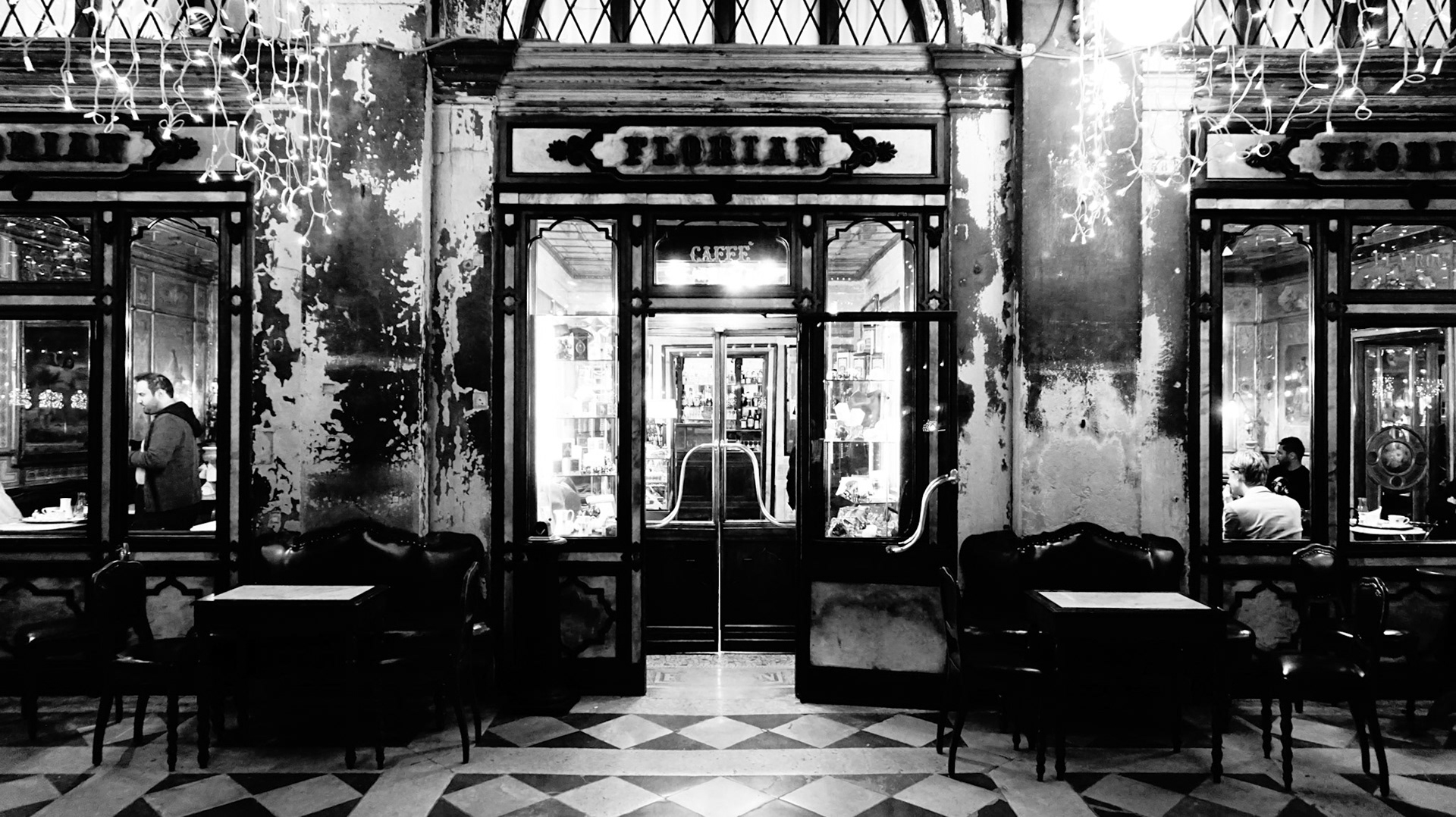 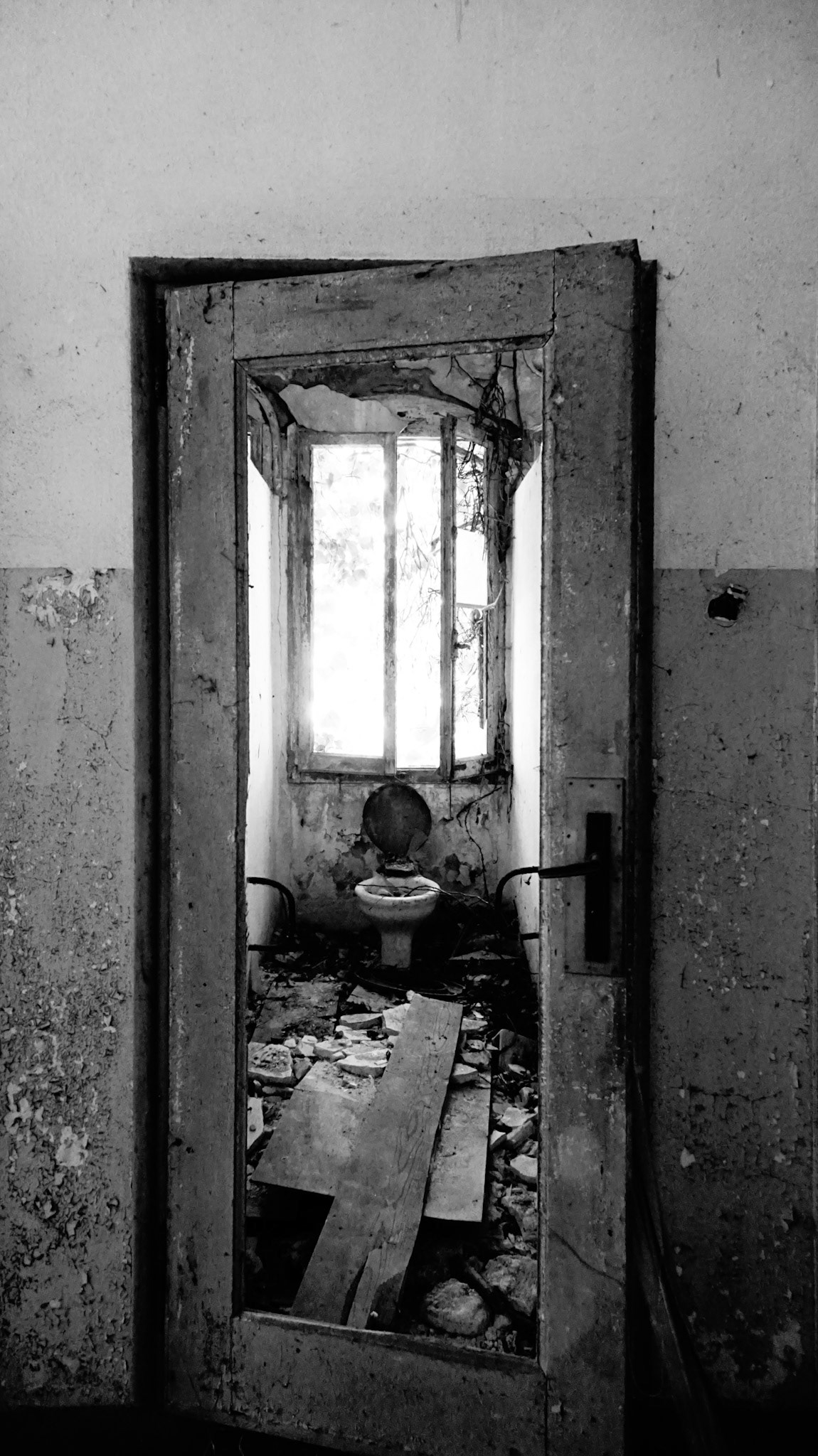 Extract From: "The Space Ship - A walk through Libertà between 05.30 am and 21.00 pm"
by Christine Bax
Sofie Kokas
– ‘Café’ en ‘The Door’ – Photographs op gatorboard –
21:00 – This city is so different when all color is missing: more realistic, and at the same time unreal. That has everything to do with the absence of Venice’s dream light. Lines take over: never straight, though, and never completely stable – simply because there are no straight, stable buildings here. So then again, time is the only thing to hold onto.
Two black and white photos; the first shows the oldest coffee house in the world – Florian. The second shows an abandoned toilet inside of a ruin. The memory of movement is present in both photos; in Florian the memory of music, the Venetians of the 19th century, who had their political discussions there, flirted, gambled, drank, and showed off. In the ruin there is the movement of the decay, still ongoing. Did this process begin when the last resident decided to return to the mainland?
A Venetian writer once compared the city to a fish attached to a hook. (Ponte della Libertà being the fish line.) Naturally, the islands should wander over time: the gulf stream picks up sand and pebbles on one side of the island and lays them down on the other. But because of cultivation, the islands are imprisoned on one spot. This causes friction; the sensation that there is more going on than the naked eye can see.
Full Text
Curator's Statement
"Venice has a bridge called ´Ponte della Libertà´ (Bridge of Liberty) that connects the old Venice on the islands to the new Venice on the mainland.
Libertà means freedom.
In a city so crowded and expensive, it’s hard to find freedom. But as a community, we can help each other and in that way create it. In a world that has so many rules and restrictions, it’s hard to find freedom. But we can go around bureaucracy and officiality, we can collaborate and in that way create it. In an art environment that leaves hardly any space for experimentation and development, it’s hard to create free work and even harder to show it to others. But if we work together, we can share our ideas, works and thoughts. And more importantly, we can do it, because we can. Because we are already free. And Libertà will be an example of what a community can achieve in freedom.
Because: Why not?
We are creating an exhibition of contemporary art that touches the subject ´Comune di Venezia´ in some way. The works will be critical, poetic, dramatic and more. The selected national and international artists are motivated and fun in a serious way."
- Gryanne Stunnenberg, GALLERGRY
Libertá Webpage
Curator: Gryanne Stunnenberg (NL) – GALLERGRY
Assistant: Lara Reuter (DE)
Artists in random order (confirmed):
Shane Guffogg (USA)
Christine Bax (NL)
Paloma Leyton (AR)
Laura Santini (IT)
Michele Deiana (IT)
Anja Dimitrijevic (RS)
Maarten van Aken (NL)
Cosima Montavoci (IT)
Sofie Kokas (AT)
Oscar Contreras Rojas (MX)
Marika Meoli (IT)
Sun Hee Moon (IT)
Bert de Geyter (BE)
Ria Geerdink (NL)
Onno Dirks (NL)
Gryanne Stunnenberg (NL)
↑Back to Top

Insert copy here, which should vary depending on your region. Accept